Mulder's Place got a little smaller last night...we lost a baby. It was attacked by something, and...they...tried to bring him back inside via one of their fox holes.

I watched them panic and fret until my guy got home... Then they watched him take the poor little thing away and bury him in the woods. Two of them followed him. They knew what he was doing and they don't seem so afraid of him anymore... We looked out the dining room window a few hours later and Fox Mama had her five remaining babies all clinging to her for milk time while she kissed and cleaned them.

We lost one last year, too... But now the latch on the door is fixed, so nothing bigger can pull it open, at least. Poor little guy...

Slept in until 6:45 and am feeling good/rested. My coffee is delicious, the sun is shining and the grass is all pretty and dewy. We watched Strange Brew last night and I hurt myself laughing (a must-see for all Canadians), heh. Rick Moranis...! Love that guy. And I loved their dog, Hosehead. Take off, eh? ^-^

Looked out the window today and saw EIGHT goldfinches all hanging out and eating at once! I had to call my guy over to come see. *LOL* 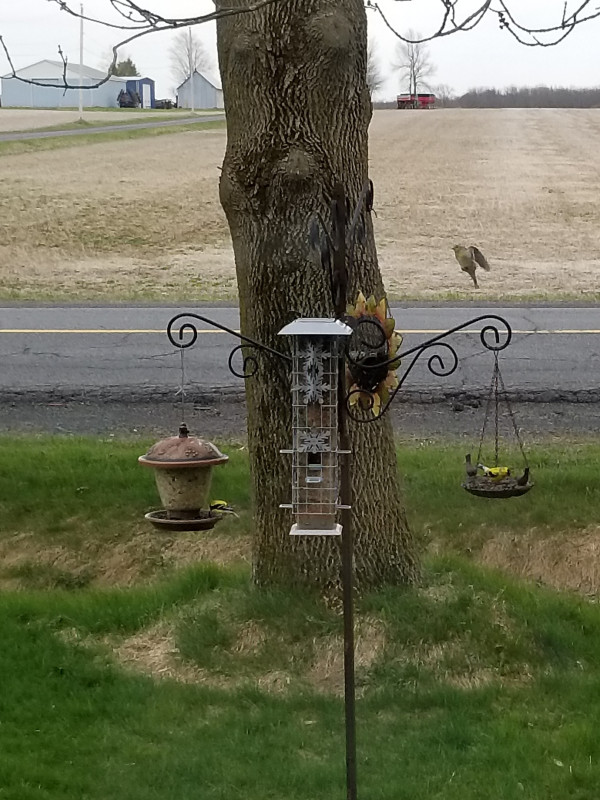